Back to all news and insights
/ 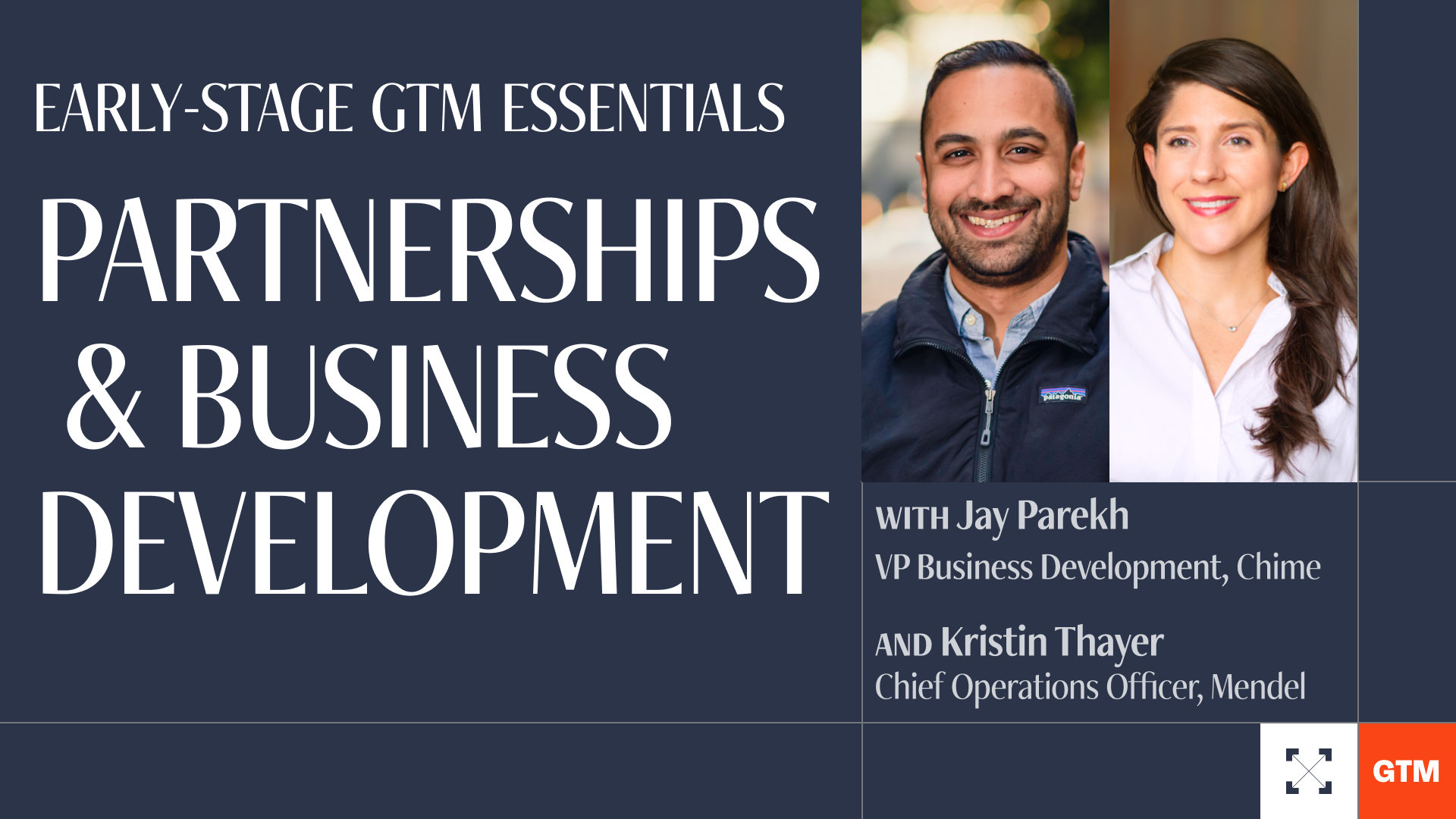 For early-stage companies, there's nothing more important than developing a winning go-to-market strategy. In this series, we’re sharing hard-won advice from the Canvas Go-to-Market Council, developed from the lessons they’ve learned over the years. Check out our posts about growth marketing and building out a sales team. Follow Canvas on LinkedIn to ensure you receive all the latest GTM tips and tools.

If you’re a founder, signing a partnership with a big name can be very tempting. Maybe you’re angling to get that impressive logo on your website, or the company you’re talking to has an audience you’d love to get in front of.

But don’t sign on the dotted line too quickly. Before diving into a partnership, there are a few hard questions to ask. The last thing you want is to lock yourself into a deal that doesn’t provide any real value. Or worse, one that actually holds your business back as you aim to grow.

Most early-stage companies navigate these challenges as they scale. That’s why we reached out to the experts for their best advice. Read on to see what they had to say about finding partnerships that are the real deal.

LEARNING FROM THE BEST

Jay Parekh and Kristin Thayer understand the ins and outs of developing partnerships. They’ve seen what makes a particularly valuable partnership—from sourcing, to negotiating the terms, to execution and reporting.

Jay started his career in finance, before becoming an early employee in product partnerships at Braintree and Venmo, ultimately leading business development teams through the PayPal acquisition. From there, Jay joined Chime as VP of Business Development, the 60th employee, where he has focused on new distribution opportunities as the team has grown to over 1,000.

Kristin started her career on the partnerships team at Facebook, where she helped build the Developer Platform and headed up the 2012 Olympics Partnerships. From there, she was a Market Development Partner at Andreessen Horowitz and led Travel Partnerships at Uber before heading up Business Development at 1stDibs. At 1stDibs, she launched the new furniture category and grew it to 40M in revenue in 3 years. Kristin is now the COO at Mendel, an AI platform for healthcare data.

Jay and Kristin recently co-hosted a session for Canvas portfolio leaders where they shared their best advice for how to approach partnerships and business development in a startup’s early days.

5 EXPERT TIPS TO CREATE PARTNERSHIPS THAT ARE THE REAL DEAL

You might think: I’ve secured a great partnership for my company. My work is done.‍

Think again: A partnership is a means to an end. Not a goal in and of itself.

You might think: This is so awesome [x] wants to work with us. I’ll loop my team in later.

Our advice: Unless your team is brought along and bought in, it simply won’t work.

“We’ve talked a lot about how to set up the right partnership with your partner. I think doing that same work internally is actually just as important, if not more important. Depending on the types of partnerships and what kind of resources you need internally, you need to do that same kind of negotiation and value exchange with your internal team. I would recommend that as you're structuring the partnership and before the deal is signed, sit down with all of your cross-functional partners that are going to contribute. There are a lot of internal resources that you're going to require to execute the partnership and you need to get that commitment and get it slotted on the roadmap so that you can actually do the job executing it. Internal planning work is just as important as doing the work with a partner to sell the partnership.” - Kristin

“It's tempting early on, especially as you meet with big partners to feel like, ‘Hey look, this is something that's going to positively impact our business in a really, really big way.’ But you should be saying no to almost every deal that you see. It's really, really difficult to structure something that has the right resources and the right incentives on both ends where those things stay in lockstep through the relatively long lifecycle of a partnership. In order to say yes, it's important to see that the partnership allows you to maintain that flexibility you need to focus on higher-value things, including going deeper into your core of the direct part of the business.” - Jay

You might think: Wow, we have a great partnership in place. Let’s make it worth their while… fast.

“Let's say you have a very clear value exchange with your partner that you're happy with. Make sure that there are clear milestones in the partnership, where you continue to have that value exchange or alignment on when you're going to execute certain pieces of the partnership that will continue to drive value. That way, you don't lose all of the momentum as things get going.” - Kristin

You might think: Google or Facebook are great with partnerships; I need someone from one of those companies.

Think again: Brand-name experience is likely less relevant than the scrappy skills a startup requires to go from zero to one.

“You need someone who has a creative, agile mindset to get to a deal where there might not otherwise be one. Oftentimes, sales folks can be very agile and think about how to get through to a deal, but it's important to probe around times that they've had to be really, really, creative in marshaling resources within the company. I find people who have had experiences at really big companies like Google and Facebook are incredibly valuable for the amount of domain expertise they've had, seeing companies and business units in super hyper-growth, hyper-scaling mode. But one challenge is that they've often been handed a set of relationships and asked to either grow them or sit on them and not really start on things from a zero to one perspective, with little or no structure in a new vertical. So it's really important, as you're interviewing those types of candidates, to probe on that.” - Jay

The Canvas Go-to-Market Council is a select group of marketing leaders sharing their hard-won expertise at early-stage companies with the Canvas community. Learn more on the GTM council page and follow Canvas on LinkedIn to stay in the loop.